Start a Wiki
"A Giant Save" is the second segment of the eighty-fifth episode of the Disney Junior series Doc McStuffins, which premiered on March 9, 2016.

Doc’s new doll from Ireland, Gillian the Giant, feels like she doesn’t fit in with the other toys because she’s so big.

Doc: Thanks for another great story, Professor.
Chilly: Oh, I love this new Gillian the Giant story. I laughed, I cried. It became a part of me.
Professor Hootsburgh: My pleasure. I do so love when I get to read a new Gillian the Giant book.
Stuffy: (Sighs) I wish I was a giant, but I guess my giant bravery will have to do.

Doc: I know how much you love Gillian's stories, so I asked my mom for a Gillian doll, and she said we could if we got a book, too. It wasn't easy to hide her, but I did it.
Professor Hootsburgh: Very sneaky, Doc McStuffins. Thank you.

Stuffy: How about dragon jumping? Not to brag, but I am a brave, awesome... oh!!! (Falls off the bed)
Doc: Are you okay?
Stuffy: Oh, come on. That was an epic fall. Counting it as a win.
Doc: (Laughing) Oh, Stuffy.

Stuffy: (To Gillian) I knew you were tall, being a giant and all, but wowie. You are ta-a-a-al1. Not that there's anything wrong with that. 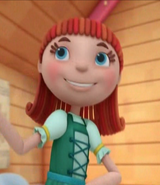 Add a photo to this gallery
Retrieved from "https://docmcstuffins.fandom.com/wiki/A_Giant_Save?oldid=47191"
Community content is available under CC-BY-SA unless otherwise noted.