Awesome Guy is an action figure who says everything is "awesome!" and saves toys.

Awesome Guy is a peach-skinned superhero with brown hair in a coif hairstyle. He wears orange superhero tights, a teal undershirt, a red cape, boots and gloves, a yellow circle with a star on his chest and dark blue underwear. 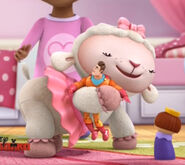