Ben is one of a pair of monkeys with his sister Anna. They are called the Huggy Monkeys.

Ben and Anna are very playful monkeys who love to hug, dance, and sing. Due to being such close siblings, they don't like to be apart from each other. As shown during their debut episode "Ben/Anna Split!", it really seemed to make the both of them sad to be away from each other for the night.

Ben is a monkey with chocolate brown fur and a pale tan face and tummy. He has dark eyebrows and a big smile, along with a few freckles. He has sticky small pads on each hand, allowing Ben and Anna to stick to one-another and hug. His arms, legs, and tail are pretty long. Ben wears a plain yellow bowtie. 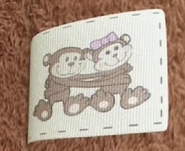 Add a photo to this gallery
Retrieved from "https://docmcstuffins.fandom.com/wiki/Ben?oldid=44867"
Community content is available under CC-BY-SA unless otherwise noted.