Donny McStuffins is Doc's 4-year-old younger brother who loves playing with his toys. He doesn't know about Doc's toys coming to life. Donny owns lots of car-related toys and action figures. We learned in "Dusty Bear" that Donny is allergic to dust so he couldn't hug his Teddy B. bear. He's best friends with Will, Luca and Alma.

Donny is very playful and curious. He loves playing with his big sister, Doc and his toys. He especially loves playing with kids his age. In the episode "Run Down Race Car", Donny is tired from racing Ricardo Racecar last night and has to go inside to take a nap before Luca comes to play. Also in the episode "Ben/Anna Split!", when Donny accidentally rips Ben's hugging patch off because of a thorn from the rosebush he shows Alma and then immediately apologizes to her.

Donny can be easily saddened when he has no one to play with or if his toys are broken, but he can trust Doc to fix up his broken toys. Donny is also always a loving son to his parents. Donny appreciates his big sister, and he knows Doc's always there for him when he needs her.

Donny is a small and slender young African-American boy with curly brown hair, dark skin, a yellow T-shirt with an orange penguin on it, jean trousers and sneakers. In the snow he wears a light and dark orange jacket and a yellow scarf. He has red gloves, a red hat and green boots.

Donny in his Turtle Trooper Uniform 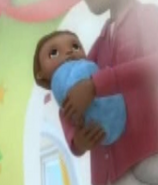 Donny as a newborn