View source
watch 01:36
We're Getting Mutants in the MCU - The Loop
Do you like this video?
Play Sound

Fixing toys, having fun, her friends, soccer, speaking Japanese, Having fun with Emmie

Stanley (Formerly)
Dorothy "Dottie" McStuffins (also known as Doc McStuffins) is the main protagonist of Doc McStuffins. She also appears in The Doc Files. Her job is to take care of sick and injured toys with the help of her assistants and her mom.

Doc shares fine respect for the toys she owns, for she even fixes toys that are broken. She cares for each and every toy she has and even her brother's or her friend's toys. Even if a toy appears to be scared, she will always be caring and friendly. Her determination for fixing toys is limitless; she will not stop until she reaches a diagnosis and she then fixes the toy any way she can.

Dottie shares a great relationship with the toys, often cuddling with them. Dottie identifies any problems with the toys and can easily settle disagreements. She has never mistreated toys, even if they are not her own. Doc proves to be a good teacher to Lambie, Stuffy, and Chilly, shaping them into good doctors.

Outside of the clinic, she is always a loving daughter to her parents and cares for her family, including her brother Donny and sister Maya. She cares for not only the toys, but also for friends outside of the house. With the help of her first-aid kit, she can help any toy and anybody. Her determination to help toys and people can travel far from the clinic.

She normally wears a glittery purple headband with a flower (consisting of 5 light pink petals around its white center on it), a white lab coat with rolled-up sleeves, pockets on each side, and a button on its left side. She also wears a lavender fleece shirt with purple stripes, a pink fleece skirt with pointy cuts, lavender knee leggings with pink and rose polka dots on them, a pair of purple ankle-length socks, a pair of sparkly pink sneakers with white trimmings, and her magic stethoscope (consisting of both pink ear tips and chest plate, both lavender ear tube and tubing, a rose chest piece, and a white diaphragm with its insignia consisting of a sienna Band-Aid with a red heart on its center diagonally to the left on a purple outline circle) that causes any toy to come to life when her family and human friends aren't with her.

Doc wears a large sunshade hat in "The Right Stuff" and "Blame it on the Rain", a pink polka-dotted dolphin swimsuit whenever she goes swimming or gets near water, a cowgirl costume in "Boo-Hoo to You!", a circus ringmaster costume in "Hallie Halloween", long sleeve purple pajamas with a rose heart in the middle whenever she goes to bed and a blue fishing hat in "Out in the Wild". Doc also wears pink bunny slippers on her feet, usually at night. Doc wears a pink jacket, purple mittens, purple boots, a red scarf, and blue earmuffs whenever she goes to play out in the snow. She wore a blue scarf in "Chilly Gets Chilly" and "Through the Reading Glasses". In Season 5, she wore a purple hat, a purple coat, and pink mittens. And whenever Doc rides a bike (or plays hockey) she wears a purple helmet with a pink flower on it. When Doc was a toddler she wore a knight Halloween costume. On Christmas Day at the end of "A Very McStuffins Christmas" she wore a green sweater with red on it. In the center of the sweater, there are light green trees that go around it, and red balls that might be ornaments at the bottom of the sweater. Doc's school uniform top is light pink with a pocket on the side and a purple bow and she has a purple skirt that has a plaid pattern. She has a purple backpack with a picture of a yellow flower on it.

When Doc traveled back to the 1800s along with her toys in "Let the Nightingale Sing", she was given a dress with a light green striped top and a dark green bottom. The middle on the top is white with two buttons. She wears a pink chef apron during "Top Lamb" while pretending to be a chef. On St. Patrick's Day during "St. Patrick's Day Dilemma" Doc wore a whole different attire. She wore a green headband with an orange flower, that had a yellow center. She had on a white shirt, with a green bow, and a green skirt with a plaid pattern. She also wore a green jacket with pockets on the bottom and green shoes. When going to the beach in "The Lady in the Lake" Doc wore a blue top with hearts on it and yellow shorts. She had blue flip-flops with a pink heart in the center on her feet. Her soccer uniform, as shown in "The Scrapiest Dragon", consists of a blue top and blue shorts. Her shorts have white stripes and her top has a picture of a soccer ball. She wears red runners with yellow shoelaces.

When giving operation to a patient in her backyard clinic, Doc wore a pink scrub top with purple-tipped sleeves and bandages on it. Her scrub pants were all pink. She wore a light pink scrub cap and a light pink mask. Her shoes were purple. In the toy hospital, she wears a purple scrub top with bandages on it, purple scrub bottoms, a pink mask with purple hearts on it and a light bluish scrub cap. When going out on a rescue mission in McStuffinsville, Doc wears a navy blue rescue life coat with light blue and orange stripes.

From "Welcome to McStuffinsville" onwards, Doc wears a hospital chief's coat and she also now wears a toysponder, a bracelet similar to a Band-Aid. Her pants now have stars on them instead of polka dots. In "Daisy Makes the Call" Doc wore a light and dark blue dress and blue tiara for Sir Kirby's blue soiree. In "On Call Ball", she wore a purple dress and a tiara for The Wicked King's Ball.

Role in the series

Doc loves to talk to toys and mend them. They come to life with the magic from her stethoscope. She cares for her friends and patients, including Lambie. She and Lambie are best friends and are always there for each other. Whenever a toy needs help, Doc always thinks carefully before she figures out what the problem is. But when someone comes or calls to Doc, she always tells the toys to 'go stuffed'. That means they have to stop talking and freeze.

Doc is the main character of the show. Her best friends are Lambie, Stuffy, Hallie, and Chilly. She knows when and where a toy needs help. She takes them into her clinic to find out what's wrong. In the episode "Chilly Gets Chilly" after Chilly stays out in the snow too long, Doc takes him into the clinic and puts him on the patients' bed with a blanket on him. When she checks his temperature, she calls her diagnosis 'brrrr-itis'. To cure his brrrr-itis, Doc and her friends warm themselves in front of the fire.

In some episodes Doc has to bandage the toys, like in the episode "Break Dancer", when Bella accidentally breaks her leg. Doc explains that sometimes when people break their legs, they have to wear a cast to heal them. After Doc puts the cast on Bella, she and her friends decorate it for her. She then tells Bella that she must wear her cast overnight.

Sometimes Doc and her mom (who is also a doctor) work together when someone needs help, either a person or a toy. In the episode A Big Pain in Teddy's Tummy, after Doc's diagnosis of Teddy B. as having "Pricklyosis in your tummius", Doc takes him to her mom, who removes the thorn from Teddy B.'s tummy and sews him up, leaving Donny free to hug and play with him again. 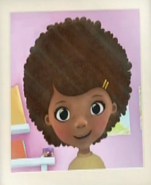 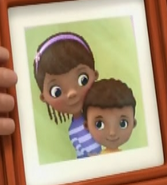 Doc in her Bathing Suit

Doc in her School Uniform

Doc in her Scrubs

Doc in her Vet Clinic clothes 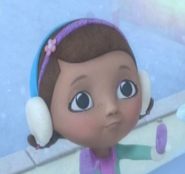 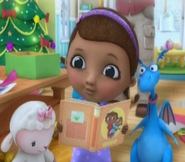 Young Doc with her Toys 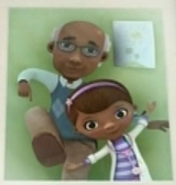 A picture of Doc and her Grandfather

Doc with her friends