Flicker is a firefly toy intended for use as a nightlight. He glows red and plays a lullaby when it's time to go to sleep and glows green and plays a ringtone-like noise when it's morning and time to wake up.

Flicker visits the McStuffinsville Toy Hospital because he is having problems with his light. After getting it repaired, he meets Lambie, who has having trouble with her three charges in the nursery, the Bouncy Babies. He offers to help get them to sleep and plays his lullaby for them while lighting up red. However, while Lambie leaves to find some comfortable blankets to swaddle with them, he malfunctions again, lighting up green and playing the morning sound, causing the babies to become energetic and leave the nursery. It later turns out that he had been helping Count Clarence to get to sleep. As Count Clarence is a bat, his normal cycle had been reset so that he was lighting up green at night and red during the day. After being reset back to normal, he glows red and plays his lullaby to the already sleeping Bouncy Babies, then the next morning he glows green and plays his morning sound for them.

He is voiced by Eric Morgan Stuart. 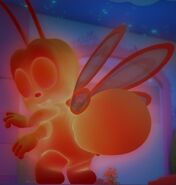 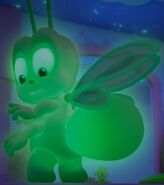 Glowing green
Add a photo to this gallery
Retrieved from "https://docmcstuffins.fandom.com/wiki/Flicker?oldid=39111"
Community content is available under CC-BY-SA unless otherwise noted.