Frida Fairy is a lovely toy fairy that both Alma and Emmie like to play with that also shoots out glitter as she flies. Frida thinks she's a real fairy just like Chilly thinks he's a real snowman, even though they are toys. She has two bad cases.

Frida is a bit of a drama queen and is very protective of her image. She uses a lot of alliteration.

Frida is a fairy kite with brown hair, light blue eyes and big, beautiful blue and yellow wings. She has a red, yellow and orange patch over her right wing. Frida has pink shoes on her feet. 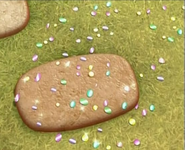