Start a Wiki
"Fully in Focus" is the first segment of the sixtieth episode of the Disney Junior series Doc McStuffins, which premiered on March 13, 2015.

Doc gives her viewmaster toy Viewy Stewie an eye exam and discovers that two of his discs are jammed causing him to see images incorrectly.

Professor Hootsburgh: Hoot! I've always wanted to travel. Where have you been?
Viewy Stewie: Been? Well, I-I've only actually been to the factory I was built in, the toy store on 52nd and Park, and Doc's house after Grandma sent me to her. But in my head I've seen the world. 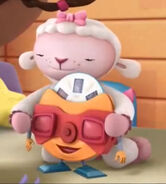 Add a photo to this gallery
Retrieved from "https://docmcstuffins.fandom.com/wiki/Fully_in_Focus?oldid=37629"
Community content is available under CC-BY-SA unless otherwise noted.