Start a Wiki
"Hazel Has a Sleepover" is the first segment of the two episodes of season two episode 28 the Disney Junior series Doc McStuffins, which premiered on November 7, 2014.

Doc discovers that Hazel the elephant, a new water toy, is embarrassed to attend a sleepover because she leaks water at night.

The day starts in Emmie's room where she is planning a sleepover with Doc at her house for that night. As she's packing up her suitcase, Doc tells her that her mom said they both can have a water fight in her backyard.

Only when Emmie and Alma'sMom came in and told them that they know that the sleepover wasn't until tonight but Emmie told her that she and her know but it was never too early to pack she agreed and left them both.

Then after Doc tells her she packed enough stuff, Emmie explains that she's bringing Pickles along per Alma's request, saying that Pickles loves sleepovers. She's also bringing along her new water toy, an elephant named Hazel who squirts water out of her trunk.

After Emmie leaves to find her sleeping bag, Doc uses her stethoscope to bring the toys to life, and explains she and Emmie are having a sleepover at her house. While Pickles is excited, Hazel is reluctant to go because has an embarrassing problem: her trunk leaks at night. Emmie then comes back in and announces that she had found her sleeping bag. She says that she'll come over after her piano lesson.

After Emmie leaves, Doc takes Hazel and Pickles to her clinic, where the others toys reassure Hazel that she has nothing to be embarrassed about. Doc runs some tests and deduces that Hazel's problem is because she's always full of water, and that's why her trunk leaks. She tells her that she can prevent it by draining all of the water out of her before going to bed.

After the problem is fixed, Hazel agrees to stay for the sleepover. Emmie and Doc then change into their bathing suits and have an afternoon water fight in the backyard. Eventually, they are called by Doc's mom to come inside the house since it's getting late. She asks if anyone needs to go to the bathroom before their bed time, and Emmie said she had to for she almost forgot. Doc advises her to drain all the water out of Hazel so that she won't leak.

When everyone wakes up in the morning, Hazel discovers that her blanket is dry, and is excited that she didn't leak during the night, while Doc praises her, saying she's proud of her.

Hazel: (after Doc sings "What's Going On?”) Well, Doc, the thing is... sometimes my trunk leaks when I sleep. It's super embarrassing. No one else seems to leak. So... I'd rather just stay home.
Doc: Aw, Hazel. I know that was really hard for you to tell me, but I'm really glad you did.
Hazel: You are?
Doc: Sure, leaking is nothing to be embarrassed about.
Hazel: It's not?
Doc: It's not. But, I would like to give you a check-up. That way, we can find out why you're leaking.

Stuffy: (as Lambie and Pickles are hugging) Ooh, I'm crashing this cuddle!

Doc: Hazel is Emmie's new water toy.
Chilly: Oh, I admire what you guys do. All that time playing outside under the hot sun. I would melt!
Doc: (Giggles) Chilly, you're stuffed, remember?
Chilly: Right, but why take chances?

Lambie: Are you guys staying for the sleepover tonight?
Pickles: Sure am! I just know Doc and Emmie are gonna to be up giggling like all night long!
Lambie: And giving us lots of cuddles too!

Chilly: (to Hazel about the sleepover) Are you nervous 'cause it's your first one? Hazel, I know new stuff can be scary. My first day at the toy store was scary. All those kids runnin' around! My first day at the McStuffins house was scary! There was a big green thing all covered in lights!
Stuffy: It was a Christmas tree.
Chilly: I know that now, but then...scary! My first day at--
Doc: Chilly, Hazel's not scared because a sleepover is new.
Hazel: The reason I don't want to go to the sleepover is...well, it's kind of hard to talk about.
Hallie: You can tell us, Hazel.
Hazel: The truth is, sometimes, my trunk leaks when I sleep. It's embarrassing, and I didn't want anyone to see.
Squeakers: (squeaky noises)
Lambie: Hazel, Squeakers says a little leaking is nothing to be ashamed of.
Squeakers: (squeaky noises)
Lambie: He says it's something all water toys go through.
Hazel: Really? Wow, I thought I was the only one in the world who leaked.

Emmie: Doc! Can you open the door? My hands are too full.
Doc: Ah. Sure Emmie be right there.

Doc: So are you gonna stay?
Hazel: I sure am.
Doc: Emmie get ready for water games.
(Later on during the afternoon Doc and Emmie changed and had their waterfight)
Doc: Emmie! You caught me!
(Both laughing)
Emmie: Want another drink Hazel? 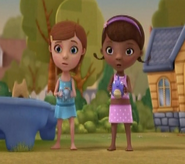 Both Doc and Emmie in their bathing suits

Add a photo to this gallery
Retrieved from "https://docmcstuffins.fandom.com/wiki/Hazel_Has_a_Sleepover?oldid=55724"
Community content is available under CC-BY-SA unless otherwise noted.