Start a Wiki
Lambie McStuffins is one of the main characters from Doc McStuffins. She is a sweet and pretty little lamb who loves ballet, and has been friends with Doc for a long time. She gets along with most characters because she is very kind. She loves to give cuddles, especially to sad patients at the clinic.

Lambie is as soft as the wool covering her! She is gentle and sweet, but usually not timid or shy. She gives good advice and loves ballet. If she thinks someone is sad she will give them advice in song and (almost always) cuddle them.

Lambie is a very sweet character with a very sweet voice. Her biggest passion is giving cuddles to anyone who needs one, toy or person. Sometimes she may feel sad or worried when something bad happens, when someone hurts her feelings, or when something happens that prevents her from cuddling. For example, in the episode "Caught Blue-Handed", when Lambie goes over to Chilly to cuddle him, Doc stops her because Chilly has caught "mystery pox". Doc issues a "cuddle-ban" to prevent the mystery pox from spreading, and Hallie warns Lambie that "I've got my eye on you", which causes Lambie some distress.

Lambie also has a strong fear of being abandoned, forgotten, and/or replaced by Doc. In the episode "My Huggy Valentine", when Doc gets a stuffed heart named Val for Valentine's Day, Lambie gets jealous of her when she invades her and Doc's Valentine's Day photo, steals her talent of cuddling, and makes the best Valentine's Day card ever. Lambie feels sad and broken-hearted, with a few tears appearing in her eyes. Doc then gives Lambie a check-up just to make sure she's okay, and give her a diagnosis of "split-heart itis." She apologizes to Lambie for leaving her out and gives her a cuddle to make her happy again. In the episode "Runaway Love", when Doc and the other toys are too busy preparing for the arrival of the new McStuffins baby to play with her, Lambie is convinced that Doc won't love her anymore when the baby comes, and decides to go live with Donny (Donny was also afraid that the new baby would replace him). After Doc reconciles with Donny, she also reassures Lambie that she will always love her.

Lambie can also be slightly immature and a little bit bratty and selfish from time to time. In "Lamb in a Jam", when Lambie gets covered in jam and is unable to go to school with Doc, she gets very angry with Stuffy when he gets to go in her place and then tries to get Doc to stay home with her by making a fake weather report forecasting a snowstorm outside the house. She then jumped into the backpack while Stuffy was in it, causing him to get covered in jam as well, although she immediately apologized afterwards. In "Top Lamb", she played with Doc's new kitchen set while everyone was asleep even though Doc told her not to.

Lambie is a white plush lamb, with a pink tutu, pink hooves, a pink bow on her head, two long ears and a small skinny tail. She also often wears a tiara when Doc plays a princess game starring "Princess Lambie". She wears pink pajamas with lambs on them at night in the episodes "Dark Knight" and "The Sleepwalking King". She also wears a yellow hat and scarf when she goes out in the snow. In "Think Pink" she wore a blue scarf instead of her usual yellow scarf. In Season 5, she wore a yellow hat, a pink coat, and pink boots. In "Out in the Wild" she wore a pink kerchief with a flower on it when she went camping.

While playing a superhero in "Wrap It Up", she wore a blue mask and has yellow stars on her tutu. She wore a yellow crown with a big red star in the middle. In "Hallie's Happy Birthday", she wore a light green shirt and a stethoscope at Hallie's Birthday Party. Lambie has a blue helmet with yellow flowers on it for when Doc takes her out on her bike or when she plays ice hockey in the episode "Goooooal!". In "Leilani's Lu'au", she wore a hula skirt at the luau party. When Doc and the toys traveled back to the 1800s in "Let the Nightingale Sing" she was given a long pink dress with frills. While playing restaurant during "Molly Molly Mouthful" Lambie played the role as a waitress and thus wore a pink apron. When treating pets in season 3, Lambie wore a green shirt with pink paw prints on it. In "Welcome to McStuffinsville", she wore a light green shirt and a mask in the operating room.

After becoming a med student at the McStuffinsville Toy Hospital, she gained a pink scrub with lighter pink hearts on it and she now wears a white lab coat of her own. She has a pink stethoscope. While going on rescue missions she wears a navy blue rescue life coat with light blue and orange stripes. While waiting for the arrival of the new baby toys in "Lambie and the McStuffins Babies" Lambie wore a purple apron with a pacifier with a blue handle in the darker purple heart in the center. There were also two darker purple hearts on both sides and two pockets near the bottom of the apron with two darker purple hearts on them as well. All the hearts sparkle.

In "Whole Lotta Hula" at Leilani's luau, Lambie wore a hot pink dress with lighter pink seashells on it. At the end of the episode, she wore a brown hat with a string of pink flowers going around it and a blue one in the center and blue sunglasses. In "Daisy Makes the Call" she wore a light and dark blue dress for Sir Kirby's blue soiree. In "On Call Ball", Lambie wore a beautiful pink dress and a tiara for The Wicked King's Ball.

Lambie is a stuffed lamb who likes to cuddle people and toys and dance ballet. When a toy isn't feeling very well, Lambie often gives them a cuddle. During the show, Lambie is often seen looking worried when Doc examines the patient to find out what's wrong. Her job at the clinic is to dispense cuddles, which seem to be a vital part of the treatment of Doc's patients. It is also hinted that she may have feelings for Stuffy.

In addition to ballet, Lambie also likes playing tea parties with her friends, including Susie Sunshine. But in the episode "Tea Party Tantrum", Susie shoves the table with her feet in temper while saying, "I don't want any tea!" According to Doc, it is hinted that Susie refuses to play tea party, even though she loves playing tea parties. By the end of the episode, when Susie has had a nap, she feels much better and happily says that she really wants to have a tea party. And in the episode "Run Down Race Car", Stuffy runs off when he hears that Ricardo Racecar should stop racing because he is out of energy. When Lambie walks to Ricardo to give him a cuddle, Stuffy runs to Lambie and hugs her. Lambie is a ballerina, just like Bella the ballerina doll.

In the Doc Files episode "The Lamb's Exam", she got squished between the cushions after Donny got up to go get popcorn, which caused her to get covered with dust. In the episode "Doc's Busy Day", Lambie got covered with dirt when Doc's little cousin Sabrina was playing rough with her in the garden. In "Lambie Gets the Linties", Lambie fell into a mud puddle and got mud all over her plush. After she got clean, she was covered with lint. Doc and Hallie have to perform surgery to remove the lint from her plush in time for her to be a part of Professor Hootsburgh's plush portrait painting. In "Lamb in a Jam", Lambie got covered in jam from the sandwich in Doc's backpack, which meant so couldn't go to school with Doc. In "A Day Without Cuddles!", Lambie got covered in flour, which prevented her from cuddling for almost the entire day. Also, in the episode "The Rip Heard Round the World", her plush got ripped by Sir Kirby's sword while she and Doc were dancing.

Lambie doesn't like getting wet. In "Slip 'N Slide", Bronty splashed so hard that he almost got Lambie and Hallie wet. This made Lambie mad, and she told Bronty not to play rough with the water in front of them. That's why in "Get Set to Get Wet", Doc keeps Lambie and Stuffy away from the water so they won't get wet. In "Ticklish Truck", Lambie got wet after being squirted by a ticklish Lenny who had a feather inside of him.

Lambie can sometimes get into trouble when she really wants something. In "Top Lamb", Lambie really loved the new pink kitchen set. She was really excited about it and the cooking show that Doc and the toys were going to put on the next day. During the night, as she was playing with it while everyone was sleeping even though Doc told her not to, she hurt her paw and accidentally broke the pink light in the oven. Lambie was worried that Doc wouldn't be her friend anymore because she broke the kitchen set. In the morning, Lambie hid her hurt paw and the broken oven until Doc sang the "What's Going On" song. After getting her paw fixed, Doc and the other toys tell her to wait for when she gets to play with it by singing. 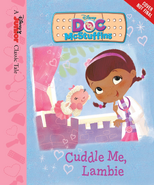 Add a photo to this gallery

Retrieved from "https://docmcstuffins.fandom.com/wiki/Lambie?oldid=52573"
Community content is available under CC-BY-SA unless otherwise noted.