Start a Wiki
"McStuffins School of Medicine" is the first segment of the fifty-second episode of the Disney Junior series Doc McStuffins, which premiered on October 13, 2014.

Doc hires Tundra, a stuffed polar bear dressed as a doctor, to be her intern and teaches her everything there is to know about being a toy doctor.

As the day begins, Doc's neighbor Emmie arrives with a cast on her foot as she brings home a light blue teddy bear in a doctor outfit as she named her Tundra as she tries to fix Robot Ray until Tundra admits to the toys that she isn't a real doctor as Doc and Hallie teach Tundra all the steps of being a real doctor.

For more quotes, see the episode's transcript
Emmie¨ Iḿ fine I just hope I can get back to gymnastics soon
Doctor said she´s be better in a few weeks only now it´s time to rest.
¨Thanks Mom. Doc I can´t go Mini golfing tonight.
¨Ahh. It´s okay.¨

Doc: (to Tundra) Becoming a doctor is a lot of hard work. But it's totally worth it! Hospitals have "interns", students who study medicine and learn from doctors. Even my mom was an intern before she was a doctor. 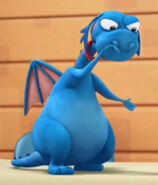 Add a photo to this gallery
Retrieved from "https://docmcstuffins.fandom.com/wiki/McStuffins_School_of_Medicine?oldid=53081"
Community content is available under CC-BY-SA unless otherwise noted.