Start a Wiki
"Picky Nikki" is the second segment of the sixtieth episode of the Disney Junior series Doc McStuffins, which premiered on March 13, 2015.

Doc and the toys help Nikki, a piggybank who only likes coins, see that trying something new can be fun after Doc tries to put a dollar bill into the bank and Nikki refuses.

Nikki: Whoa, Doc, what's that? That's not a pretty shiny coin.
Doc: It's a dollar bill. It's money made from paper.
Nikki: That's different.
Doc: It is. But it's still money.

Lambie: It may not be a coin, but it's light and soft like a twirly, swirly feather. See?
Nikki: That looks kind of fun, I guess. Uh, you know what? I think I'm just gonna stick to coins.

Stuffy: (About Doc's dollar bill) Oh, me, me. I'll guard it, Doc.
Doc: Okay, Stuffy. But you have to keep it somewhere safe.
Nikki: Being in charge of Doc's money is a really important job, Stuffy.
Stuffy: Don't worry. I'm gonna keep it right here in my pocket. Oh.
Chilly: Oh, Stuffy, your pockets are gone. Here, let me put it in my pocket. My pockets are gone too!
Stuffy and Chilly: Aaahhh!
Stuffy: Come to think of it, we never had any pockets. 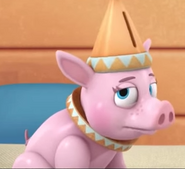 Add a photo to this gallery
Retrieved from "https://docmcstuffins.fandom.com/wiki/Picky_Nikki?oldid=37630"
Community content is available under CC-BY-SA unless otherwise noted.