Start a Wiki
Suki aka Baby Suki is an infant baby girl who lives down the street. Her mother asked Mr. McStuffins and Doc to babysit while she went out to run a few errands. According to her mother, Suki's favorite toy is Waddly Penguin.

Suki loves playing with Waddly, mostly because Waddly has a mirror on her tummy for Suki to look at her face. But when Suki blew a few raspberries, she got baby guck on Waddly's mirror. The mirror was so dirty that Suki couldn't see her reflection, and that made her cry. Mr. McStuffins thought Suki was tired and went to put her down for a nap while Doc took Waddly to the clinic for a checkup. After Doc found what was wrong with Waddly and cleaned up the baby drool that she had all over her mirror, she went to find Suki, who had napped a bit and was still crying. The minute Suki saw her reflection in Waddly's mirror, she stopped crying. When Mr. McStuffins took Suki back to the living room, Suki dropped Waddly, and after a few seconds, she started fussing until Doc came and returned Waddly.

Suki and her mother made their second appearances in "Hooty's Duty", where they attended the baby shower for Dr. McStuffins. Suki was getting a little fussy, so her mother took her into the kitchen to calm her down. Suki was happy to see Doc, who couldn't resist such an adorable baby. Suki's mother gave Doc permission to let Suki play with her toy Professor Hootsburg, who took an instant liking to the baby. 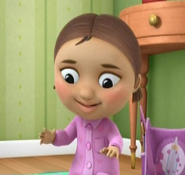 Add a photo to this gallery
Retrieved from "https://docmcstuffins.fandom.com/wiki/Suki?oldid=56377"
Community content is available under CC-BY-SA unless otherwise noted.