Winnie the Pooh and his friends,

Into the Hundred Acre Wood! 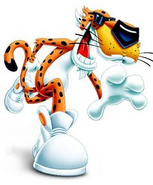 Tigger in the Movie
Community content is available under CC-BY-SA unless otherwise noted.